Psychcentral just put up this article, Top 25 Psychiatric Prescriptions, giving a break down of number of prescriptions written for different kinds of psychiatric meds written last year. 9 of the top 10 meds on the list are primarily for anxiety and depression,

I’m not really sure how to interpret these numbers. They’re a lot, and not a lot, and it probably means both good, and not such good things about our society.

Some things to consider off the start are that many people are on more than one med, and on average you need to get your script refilled once every few months. If you break it into the most conservative estimate, lets say that people are taking a cocktail of 3 meds (which would be a pretty high number of meds to be on) and that they get their prescription refilled once a month you’re left you’re left with 8,936,416,67 or roughly 9 million people on medication. One million more people than live in NYC. That is a pretty sizeable number of people to have on meds, but it’s a lot lower than the number of people suffering form a mental disorder in a given year according to NIMH. They say they’re basing their numbers on the WHO estimates, but I wasn’t able to find out how they’re basing their numbers.

So how can you look at this? The upside is probably that the stigma of taking meds has significantly decreased, so more people who need help are likely to seek it out. At the same time, what does this mean about the kind of social and psychological conditions that our society lives under? The meds in the top 10 really aren’t targeting things like delusions, hallucinations, mania, or anything like that. They’re for people who feel sad and worried.

Depression and anxiety do have chemical basis, but they’re also strongly affected by the kinds of social contact, supports and coping skills people have, where things like schizophrenia and mania which are much less driven by social contact. It doesn’t really matter how good you are at handling life and how many true friends you have when you KNOW that the tv is sending you coded messages about how you’re the next messiah.

The hypothesis that rings truest for me (as opposed to its acceptance, marketing, increased genetic predisposition, etc.) is that maybe our society is currently not set up to provide the right kinds of social interactions that people need, or that no ones thinks they should be distressed as an indication that an important event has happened or something is amiss in their life. I think about how many people I interact with in the world at large that are mostly motivated by fear, which spins into isolation, in both knowing others, and knowing one’s self. In my experience as a counselor having both of kinds of knowledge are key to finding one’s way out of depression and anxiety in the long run, and maybe with the help of some good psycho-pharmacology.
Posted by Michael Reisner, LMHC at 4:34 PM No comments: 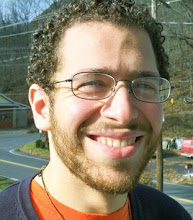